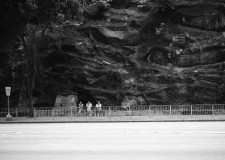 The three amigos in Kowloon Near the Star Ferry pier

Hong Kong can be a difficult place to sit. The metro stations and shopping malls have little to no places to sit. Hong Kong is a place of hostile architecture, it does not want you to stop but keep walking and walking, buying and buying. Sitting in  Hong Kong is usually designated towards the numerous ‘sitting out areas’ in Hong Kong, somewhat bizarre areas usually next to a road where people can sit. Rather than something out of a human concern they seem more of an after thought, a place to stash the elderly out of sight while the young go shopping. In older neighbourhoods where the streets still belong to the people will place seats outside to reclaim some part of public space.

There is something fascinating about people taking smoke breaks in office areas, the contrast between the grimy alleys and the suit wearing office workers.

There is a festive feeling to this photo. The yellow of the fruit and the women blending in with her red jacket and orange backpack.

Cold milktea after a morning of work

The texture of the rock gives this picture a dramatic feeling. I had to wait quite a while for the cars to stop passing by hoping that these three kept sitting where they were.

Hong Kong is not a kind city for the elderly. The graffiti on the right states that the truth will come to light one day. This refers to the Prince Edward Station Attack on 31st of August 2019

When there is nothing to do you look at your phone. What consequences will this if we live in a society where the mind is no longer let to wander?

Hong Kong has many small shops where I am never sure what exactly it is they are selling, As an outsider my shop categories are woefully inadequate and lack the imagination required to fully comprehend the bizarre variety of Hong Kong’s different shops.